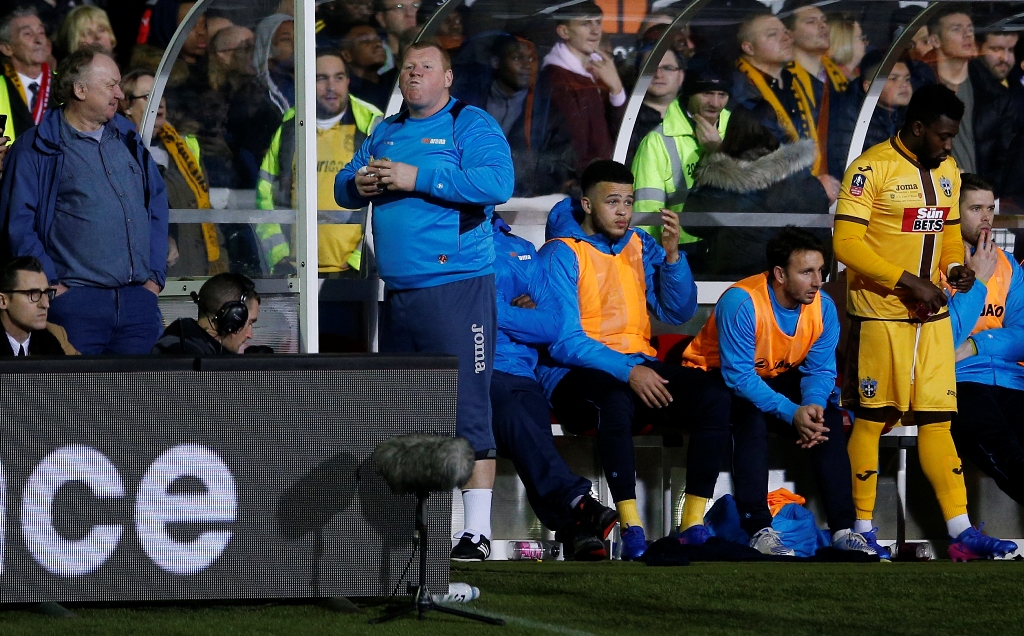 Sutton United have produced one of the greatest FA Cup runs in recent memory this season, culminating in a showdown with Arsenal last night. However, their achievements are now being overshadowed by a big lad with a penchant for a bench pie.

The 23-stone stopper was accused of overshadowing the club’s achievements, hogging the spotlight on the biggest stage.

Shaw concedes it was just a “bit of banter” – because everything’s “a bit of banter” these days, isn’t it, lads? Right? Banter, yeah? ALL GOOD BANTER!!! – but could now be facing an FA investigation.

According to the FA’s strict betting rules, “A participant shall not bet, either directly or indirectly, or instruct, permit, cause or enable any person to bet on (i) the result, progress, conduct or any other aspect of, or occurrence in, a football match or competition.”

At first, pie-gate seemed like nothing more than a laugh, but in reality, it has taken the gloss off the most historic night in Sutton’s history, and not done anything to help non-league shake off an ill-informed stigma that it is unprofessional – U’s manager Paul Dosswell, talking about Shaw’s stunt, conceded: “I don’t think it shows us in the best light.

“Wayne has become a global superstar on the back of being 20st, ” Dosswell added. “He’s made that a chance to get more media coverage off the back of it. It wouldn’t surprise me.”

Speaking on BBC 5 Live, Sutton’s chairman, Bruce Elliott, was also clearly unimpressed with Shaw, and said: “If you knew the roly poly goalkeeper you probably wouldn’t be very surprised. But Wayne is a top man.

“I didn’t know anything about it. He has got himself in the papers again and the fame obviously has gone to his head a little bit, but we will soon bring him back down to earth, don’t worry about that.”

Elliott might not need to bring his bubbly no. 2 back down to earth though, because the Gambling Commission might do so before he gets the chance – they are investigating the pastry stunt to see whether there was any “irregularity in the betting market and establishing whether the operator has met its licence requirement to conduct its business with integrity”.

“Integrity in sport is not a joke and we have opened an investigation to establish exactly what happened,” added thhe commission’s enforcement and intelligence director Richard Watson. Too right.

So well done Wayne, instead of people taking about the performance your side gave last night, or how good Roarie Deacon looked, or how, like Arsene Wenger said, non-league has come such a long way in his 20 years as a manager in England – they’re talking about you and your greasy sideline antics, and you could be in a lot of hot water.

As a goalkeeper, you’ve made yourself less like Buffon, and more like a buffoon. And that’s a massive shame, because Sutton deserve a lot of plaudits.