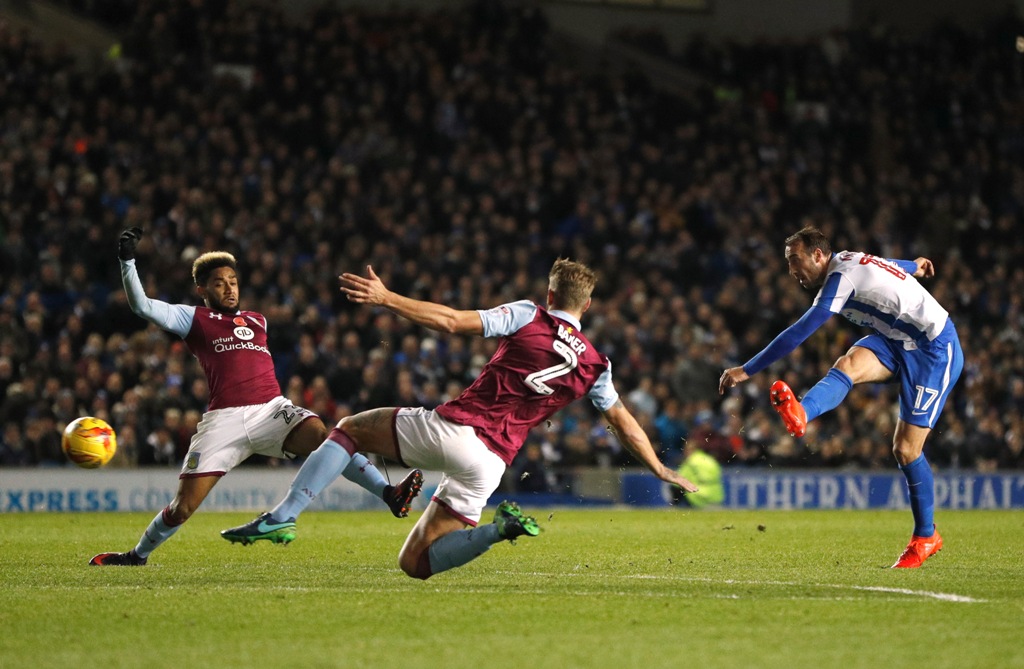 BRIGHTON & Hove Albion haven’t been a club you can closely associate with success over the years.

Heady days in the early 1980s provided some colourful history for the Seagulls – and an FA Cup final appearance – but it was only a brief flirtation with England’s top-flight.

It was followed by nomadic years of mistreatment by dodgy ownership and time playing at a converted athletics stadium that was once a zoo.

However, things on the sunny south coast are changing, and Brighton could be dining at the top table for the first time since the days of Alan Mullery, Mark Lawrenson, Peter Ward et al very soon indeed.

They are a club that is the envy of most of the Football League, and even some in the Premier League, thanks to their facilities, and what they have in place down in Sussex.

After their brand new, state-of-the-art training ground was opened two-and-a-half seasons ago, the Seagulls have a training complex to match their 31,500-capacity American Express Community Stadium. They have produced English talent such as Solly March and Lewis Dunk, and also have a manager at the helm who knows what he is doing.

Hull City captain Curtis Davies played under Chris Hughton at Birmingham and described him as, “second to none. The best in the business”.

Newcastle fans also hold him in high regard, after he brilliantly led them to the Championship title in 2010, while the former Tottenham full-back is still lauded for the job he did at Birmingham in 2012.

He wasn’t universally popular at Norwich but the Canaries were well clear of the Premier League relegation zone before he left the club.

It does seem like Hughton could be exactly what Brighton need to take them to the next level; their final missing piece of the puzzle.

The infrastructure is there; the training ground, the stadium, the academy, the fanbase. Even the pies at the Amex have been voted as the best in English football!

Brighton need a team to match the facilities, and Hughton is providing that.

After two failed play-off campaigns in 2013 and 2014, under Gus Poyet and then Oscar Garcia, the Seagulls started the 2014-15 campaign with the newly appointed Sami Hyypia in charge; a gamble that didn’t pay off.

A shocking summer of recruitment was followed by a shocking first-half of the season, which ultimately ended with Hyypia resigning three days before Christmas with just one win in 18 games.

In came Hughton, an appointment that impressed fans and pundits due to his previous experience and Brighton’s location in the Championship bottom three – but that is how attractive Brighton are to players and managers alike.

In all honesty, the transformation didn’t happen overnight, with only six more wins that season sealing Championship safety with just a six-point cushion.

However, Hughton completely changed the feeling around the club, and the Albion have since gone from strength to strength and are a side closer to the Premier League than ever before.

Last season was an unbelievable one, with a club-record 21-game unbeaten run and just five defeats all season – four of those coming within a tough festive period.

It was a season that began with quiet optimism, before trailblazing into a campaign full of passion and belief.

The shocking events at the Shoreham Air Disaster encompassed that, with club groundsman Matt Grimstone and season-ticket holder Jacob Schilt two of the 11 victims.

It was a tragedy that stunned the Sussex community and, after the initial pain and sadness, brought everyone together.

The club’s motto, #Together, seemed trivial at the start of the season, but was so apt after the events that day in Shoreham.

The playing staff, management team and fanbase were brought together in a dark time.

Team spirit is a term thrown about in football, but at Brighton it seems like they really do have it. Everyone associated with the club came together for the community and for the families of the victims. Football is so insignificant in times like that, but it was an amazing way of showing how sport can bring people together.

In the end, an emotional and brilliant season didn’t get the ending it deserved. An amazing turn of events provided a do-or-die game on the final day of the season between Middlesbrough and the Albion, with Hughton’s men just missing out on automatic promotion on goal difference after a 1-1 draw at the Riverside.

It was then the play-offs and two tough legs against Sheffield Wednesday.

After suffering four injuries in the first-leg, the Seagulls bowed out to the Owls 3-1 on aggregate. It was a bitter pill to swallow, but Hughton and his special group of players haven’t suffered a hangover.

Although Newcastle were hot favourites to run away with the Championship at the beginning of the season, Brighton are still only one point behind them with eight thrilling games to go, and have genuine aspirations to win the league, not just automatic promotion.

A thumping 5-0 win at home against Norwich at the end of October, and recent 3-0 thrashings of Reading and Derby have shown what they are capable of, but perhaps it was the Albion’s 2-0 win at Bristol City, on Bonfire Night last year, which best summed the Seagulls up.

Midfielder Steve Sidwell scored an astonishing 50-yard opener with his weaker left foot and immediately ran to the touchline to collect a shirt with the name Knockaert on it. He then held it aloft with his team-mates.

The former Chelsea man had just scored one of the goals of his career, but his first thought was to offer a tribute in memory of Brighton winger Anthony Knockaert’s father, Patrick, who had just died in France. It yet again highlighted the Seagulls’ spirit.

The victory against the Robins showed that Brighton are ready to go the next step and get over the line.

Their control of the game and solidity at the back, coupled with attacking talent going forward, showed they have learnt their lessons. In a season that has been so memorable so far, that win might get underestimated, but it shouldn’t be overlooked.

Promotion was settled by goal difference last season, but there’s no way that will be the case this time around. There is still a long way to go yet, with Huddersfield refusing to lie down, but no one should be surprised if the Seagulls fly into the Premier League.

*This article originally featured in Late Tackle, with the next copy out on April 20th.