HAVE you heard the one about Emile Heskey? What do you get if you cross a ball and Emile Heskey? A goal kick. A new Mr Men character has been suggested, based on Emile Heskey. Mr. Sitter. Emile Heskey has revealed that he’s been wearing a t-shirt under his top ever since his last goal and will show if off the next time he scores. It says ‘Free Nelson Mandela’.

These Emile Heskey jokes are crossing the line… unlike his shots. Heskey operated as the target-man during an England career spanning 62 caps, 11 years and four major tournaments, but in this country he has long been a target-man for the wrong reasons.

His current renaissance and subsequent cult celebrity status Down Under for the Newcastle Jets prompts a re-assessment of Heskey’s career in his home country, which spanned from his debut at Leicester City in March 1995 until his contract expired with Aston Villa earlier in the summer. 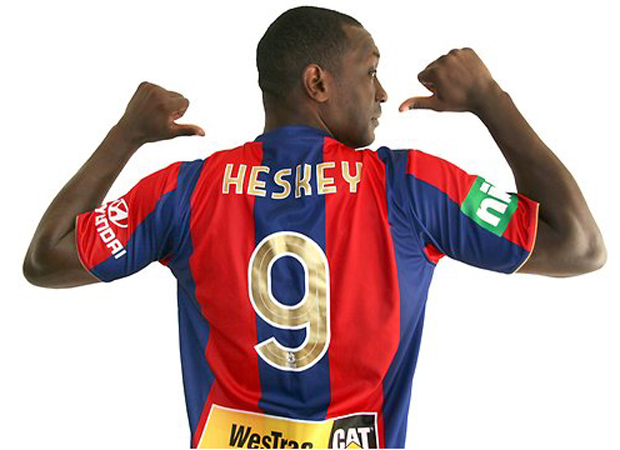 Over the years he amassed 516 games in the Premier League and 111 goals. Put into context he is sixth in the list of all-time Premier League appearances, ahead of more illustrious countrymen Sol Campbell, Paul Scholes and Alan Shearer; 16th in the scoring charts ahead of the likes of Ruud van Nistelrooy, Robin van Persie and Didier Drogba.

With five goals in his first six matches for his new club, Heskey has won the hearts and minds of his new Australian audience. He is not the first former England international to make the move Down Under in recent years; Robbie Fowler enjoyed two stints with North Queensland Fury and Perth Glory, but Heskey’s success so far has perhaps already surpassed that of his former Liverpool team-mate.

Heskey’s move to Australia reflects the growth in stature of the A-League, which is matched by its clubs. Heskey was joined Down Under by Italy and Juventus legend Alessandro Del Piero in September; both have been the subject of Australian broadcaster Fox Sports’ innovative ‘Hero Cam.’

The pre-match publicity for Heskey’s moment of fame exclaimed: “Heskey Cam gives you it all: one camera, one hero; every pass, every run, everything Heskey does on the pitch, you’ll see it first with the Heskey Cam, the dedicated broadcast providing a rare insight into what makes Heskey so good.”

Poor Emile can only dream of similar levels of adulation back in his native England though.

Despite his departure from these shores he remains the butt of jokes, a figure of fun, and, as such, his respectable record at both club and international level is often overlooked. Heskey began his football career as a swashbuckling powerhouse of a centre-forward back in the late 1990s at his hometown club, Leicester City, under Martin O’Neill.
Between 1996 and 2000 Heskey scored 33 goals in 123 league games and won his first international call-up while also winning the League Cup. Twice. 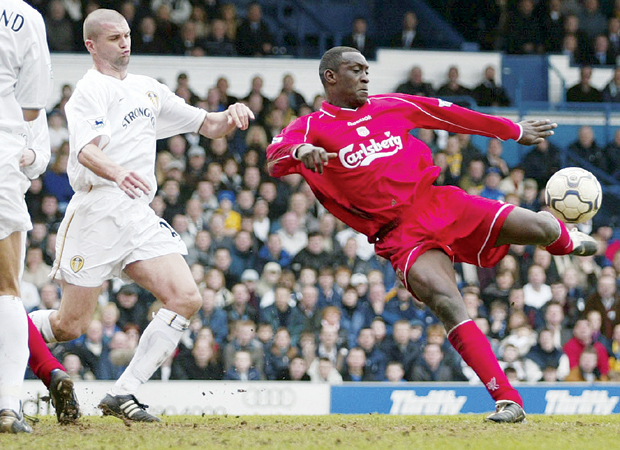 A scoring rate of roughly one in every four games perpetuated throughout Heskey’s career, and while profligacy creeped into his game over the years, the prolificacy of his strike-partners endured.

This fact was most pronounced during his four-year stint on Merseyside, when Gerard Houllier spent a then club record £11 million in March 2000 to bring him from Filbert Street to Anfield. Heskey brought a different dimension to Liverpool’s strike-force, the perfect foil to Michael Owen and Fowler, as he had previously been to Tony Cottee at Leicester City.

After a settling-in period at the end of the 1999-2000 season, with three goals in 12 appearances, the England international made a spectacular impact in the next season as his new club claimed a Cup treble. A winning goal against Bradford City on the opening day of the season proved to be the first of 22 strikes over the season, making the 2000-01 season by far and away the most prolific of his career.

Tellingly, too, 2001 was the year that Michael Owen won the Ballon d’Or. Houllier’s Liverpool were at their most brutally effective between 2000 and 2002, with their zenith arriving in 2001, and their English strike-partnership was the apex of this.

In those two seasons Owen struck 52 goals, Heskey 36; 88 of the 105 league goals they procured between 2000 and 2004. They formed one of the most prolific strike-partnerships in Premier League history, a fact often overlooked.
As Houllier’s Liverpool fell off the rails between 2002 and 2004, Heskey’s career never quite recovered.

As he traversed through the Premier League landscape between 2004 and 2012, Heskey’s goal-scoring record plummeted to unprecedented depths; he managed just 38 in eight years for Birmingham City, Wigan Athletic and Aston Villa.

His departure from Liverpool seemingly marked the end of his England career, as, following the emergence of Wayne Rooney, Peter Crouch and Jermain Defoe on the international stage, Sven-Goran Eriksson deemed Heskey
surplus to requirements.

Between 2005 and 2006 Heskey did not make a single England appearance but found himself recalled to partner Michael Owen during Steve McClaren’s ill-fated reign.

A recall from the international wilderness marked a renaissance for the burly centre-forward, who became central to Fabio Capello’s England. During qualification for the 2010 World Cup Heskey became an ever-present. His effectiveness in this period can, again, be measured by the prolificacy of his strike-partner at the time, Wayne Rooney; the Manchester United striker struck nine goals as England excelled on their way to South Africa.

As England limped through the 2010 World Cup and Capello abandoned the set-up that had brought such success during the qualification process, Heskey became the scapegoat.

He retired from international football shortly after England’s lamentable 4-1 defeat to Germany. Sixty two caps and seven goals over an 11-year period bear testament to both Heskey’s prowess and his limitations. 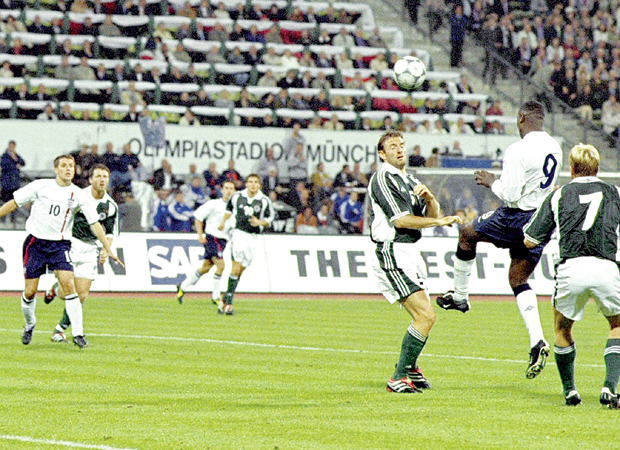 Though Owen and Rooney both profited from Heskey’s presence on the pitch, his lacklustre goal-return has left his critics pondering how Heskey received more international caps than Robbie Fowler, Andy Cole and Matt Le Tissier put together.

His most famous moment in an England shirt, the fifth goal in the 5-1 routing of Germany in September 2001, has been immortalised in song, but, like his reputation as a target-man, for the wrong reasons; 5-1 and even Heskey scored.

At his best, between 2000 and 2002, Heskey was a beast of a centre-forward, a bulldozer of a player – raw aggression teamed with blistering pace, but somewhere along the line came a bewildering metamorphosis as his self-belief drained away.

The Emile Heskey of 2012 is a poor imitation, an illustration of the fragility of human mortality; he could no more score a goal, as hold up play. Such is the short-term nature of human memory that it is this version of the former England
international that resides so prominently in the collective conscious. 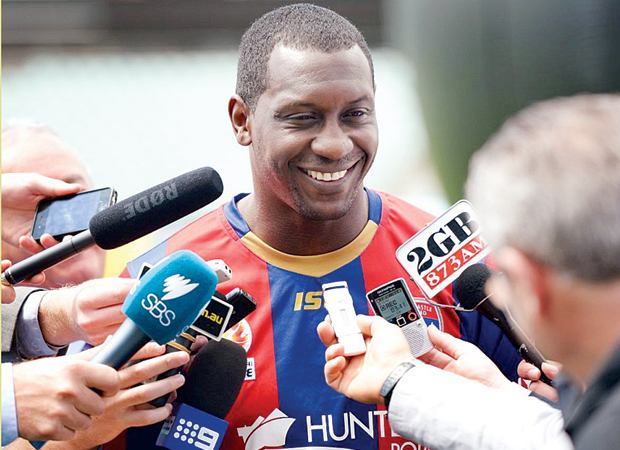 In short, Heskey does not deserve the level of vicious criticism or disparaging terrace abuse he has been consistently subjected to. He should be commended for reinventing his style of play, from a battering-ram to a target-man, who brought the best out of those around him.

Owen enjoyed the best years of his career alongside Heskey, while Rooney has only ever been able to perform to a highly consistent level in an England shirt when Heskey has acted as his foil.

Heskey’s critics perennially remark that strikers are judged by goals, but football clubs are judged on trophies won. During the prime of Heskey’s career he won six trophies with Liverpool in just under two years, not bad for the most maligned English footballer of his generation.

If the beginning of his spell in Australia is anything to go by, Heskey is well on the way to creating a separate legacy, away from a country that has so unceremoniously rejected him.