Not for me, Clive – Stories From the Voice Of Football, by Clive Tyldesley, published by Headline, Price: £20

CLIVE Tyldesley was ITV’s senior football commentator for 22 years and his autobiography provides an entertaining insight into the life of a commentator obsessive.

Tyldesley has spent time with many of the big characters of the game, including Sir Alex Ferguson, Bill Shankly, Brian Clough and Sir Kenny Dalglish, and his encounters are well worth the retelling.

Many of the stories show the dark side of the big characters as well as why they were so successful. Clough, for example, was a man of many contradictions.

“He could be rude; he could pick you apart until you fell to pieces in front of him. And yet the same man softly charmed my parents when he made a surprise appearance (in green sweat top and tracksuit bottoms) at the restaurant where I held my leaving-do. Surprise was his favourite weapon.”

Tyldesley has plenty of opinions to share in the book, whether it be on other commentators or topics such as social media and racism.

His beliefs are well summed up when he states: “Following the evidence is my kind of journey. About turns can be some of the best and bravest moves we make in life, if they steer us away from dogma and gospels.

“And yet U-turns by public figures are portrayed as signs of indecision and ineptitude. There is no future in being open-minded.”

Boxing commentator Reg Gutteridge was Tyldesley’s mentor, and he helped to shape the commentator that we know so well today.

He encouraged Tyldesley to be inclusive and welcome everybody into his broadcasting. 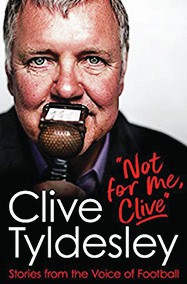 He is renowned for his ex- tensive research and compiles hand-written charts before every game.

He believes his preparation is crucial to his success as a commentator, but he is not too precious to admit his commentary mistakes.

Tyldesley runs through some of the big moments in his career but recognises he was lucky that there were unbelievable games.

He states that if the scripts for the 1999, 2005 and 2012 Champions League finals had been presented to commissioning editors in TV drama departments, the writers would probably have been told to go away and make them more believable.

He was baffled by the decision to remove him from his role as ITV’s number one commentator in 2020.

He is still working for several media organisations but says he will miss commentating on England games and the Champions League.

Tyldesley’s is one of the defining TV voices of the last two decades-plus and his emotive tones have resonated with football fans everywhere.

His autobiography is well worth your attention whether it’s for his views on the art of commentating, stories about the game’s big characters, or opinions on many contemporary issues.