FORGET, for a moment, the righteous bleating of European Leagues. Anyone who thinks the most outrageous aspect of a World Cup in Qatar is a spot of domestic disruption has got their priorities wrong.

Does the average fan really care if the Premier League stops for six weeks? It’s not like they won’t have any football to watch.

Yes, we have our ‘traditional’ Christmas fixtures. But we used to have ‘traditional’ 3pm kick-offs on Saturday and you don’t hear the Premier League clamouring to protect those, do you? Of course not. There’s no money in it.

The only reason Richard Scudamore and his pals are kicking up a stink is because they’re worried that the loss of bumper festive fixtures will weaken their negotiating position next time the TV rights come up for renewal.

And after all the corporate backslapping that accompanied the latest £5bn fleecing of Sky and BT, that just wouldn’t do.

No, don’t go getting the violins out for the Premier League. They’ll be just fine. The clubs who really benefit from Christmas fixtures – those League One and Two minnows for whom cashflow is king – won’t need to stop for the World Cup.

In fact, they will probably emerge an unintended beneficiary as fans of top-flight clubs seek their fix elsewhere.

Remember, too, that Europe has had its own way for a long time. Brazil and Argentina – where the season traditionally ran from May to December until a recent bout of jiggery-pokery – have spent the best part of a century rearranging their domestic programme to fit around a summer World Cup.

With seven wins between them – plus another two for Uruguay – it’s not as if it’s done the South Americans any harm.

Here in England – and indeed much of Europe – we’re so hung up on tradition that we never stop to ponder the benefits of change.

Yet South American countries regularly tinker with both the structure and schedule of their national leagues. Not every incarnation is a success (and some have been cynically rigged to favour the biggest sides) but at least they know what works best.

Start the season a month earlier and we might find attendances rise due to warm weather. Insert a six-week break for the World Cup and we might discover the players who don’t go to Qatar return fresh and injury-free.

We might not, but until we try, we don’t know. If everyone subscribed to the ‘If it ain’t broke, why fix it’ mantra, we’d still be driving to matches on horses and carts. 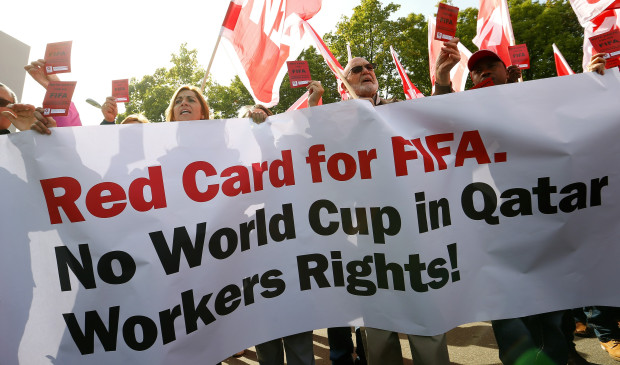 And are we really saying that any country with extreme weather in June cannot host the tournament? It’s hardly a ‘World’ Cup if half of Asia and all of North and Western Africa are on the blacklist.

No, domestic disruption is not the issue, much as the Premier League would have us believe. The real problem is that petty disputes about festive fixtures are being allowed to detract from a corrupt bidding process that awarded a World Cup to a murderous, totalitarian regime.

A regime that has – so far – allowed some 1,200 migrant labourers to die in the process of building World Cup stadiums.

A regime that packs them ten to a room in 50-degree heat, causing fit young men to suffer heart-attacks.

A regime that lures impoverished men and women to its sandy shores only to force them into modern-day slavery.

A regime that imprisons homosexuals, lashes drunks and hands out life sentences to anyone who criticises the ruling family.

A regime that turns a blind eye as funds intended for the World Cup are siphoned away to fund Islamic State.

And what was FIFA slimeball Jerome Valcke’s response after visiting a few spruced up worker’s huts and shaking hands with some paid-up patsies?

He hailed the “power of the World Cup” for sparking improvements in human rights and declared everything fine and dandy.

If you want to know why England and every other right-thinking country should boycott the 2022 World Cup, these are the reasons, not missing out on a Boxing Day at Old Trafford or the Emirates.

It has become the get-out clause par excellence for any ruling body to proclaim that sport does not get involved with politics.

It is why UK Athletics sent Olympians to Beijing and Sochi. Why Robbie Fowler was sanctioned for having the temerity to support Liverpool’s striking dockers. Why Bernie Ecclestone and the FIA shamefully allowed the Bahrain Grand Prix to go ahead in 2012.

So what if the government had violently suppressed unarmed and peaceful protestors? So what if 35 were killed and thousands more arrested and tortured? Nothing to do with sport.

Christian Horner, of Red Bull, said: “Martin’s summed it up perfectly, I think. Formula One is a sport at the end of the day and it’s wrong for it to be used politically.”

What self-serving, buck-passing, cowardly garbage. Every single one of those teams had a chance to show sport could be used to make a stand for human rights rather than economic gain. All of them took the money and ran. Worse still, their appearance served only to legitimize a brutal dictatorship.

Which is exactly what England, Germany, Brazil and the rest of the world’s big guns will do if they set foot in Qatar in 2022.

FIFA, of course, is more than happy to legitimize anyone who lines its pockets. Their conduct is so sleazy and their morals so bereft that they have become almost impossible to slander. Their delegates have been well paid to back Qatar and they’ll happily brazen it out for a millionaire’s lifestyle. Don’t expect action from them.

But everyone else – and this includes every player and supporter thinking of heading for the desert – should remember that every dollar spent and every ball kicked is propping up not one but two amoral regimes.

Sport and politics DO mix. They always have. And whether it’s by refusing to play in Qatar or setting up a rebel tournament off their own back, this is a chance for the world to show that money doesn’t always talk. That sport can shout louder. Surely that’s better than letting FIFA get away with it again?