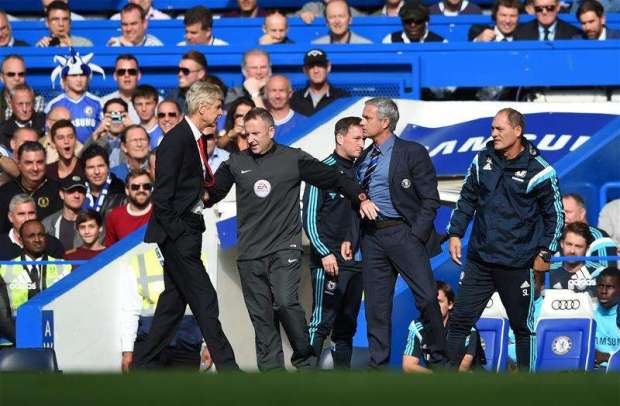 Ged Barnes imagines what would happen if Jose Mourinho, Arsene Wenger, Louis Van Gaal and Manuel Pellegrini went away for a weekend together…

It is believed the holiday was the brainchild of Chelsea manager Jose Mourinho, yet another sign that the pressure of an early season slump is beginning to severely affect the Portuguese manager’s judgement.

Mourinho was accompanied by Manchester United’s Louis Van Gaal, Manchester City’s Manuel Pellegrini and Arsenal’s Arsene Wenger. It is believed that Brendan Rodgers was hurt by his omission from the touring party, and blasted the Post Office for displacing his invitation. In an interview, Rodgers said: “What used to be a hugely successful organisation has gone well and truly down the pan. I have to believe that they can show the character to recover from this increasingly poor situation.”

It is not known, however, if Rodgers was discussing the Post Office or his recent dismissal from Liverpool.

Van Gaal, Mourinho and Wenger were spotted laughing at the airport, presumably at City manager Pellegrini, who arrived late after forgetting his passport.

While the four began their holiday in good spirits, things took a sinister turn as soon as the four boarded their aircraft at Heathrow.

It is believed that Van Gaal began to choke on an extra plain crisp and, while one of the stewards successfully assisted the Dutchman, Van Gaal subsequently lambasted Mourinho for not including a doctor in their touring party. Mourinho tried to divert the blame to the steward, but Van Gaal was having none of it. An eyewitness said of the incident: “Van Gaal went crazy, shouting that this was not the correct ‘process’ when eating a crisp. His face was incredibly red and Wenger had to step in to stop the pair fighting in the aisles. Pellegrini was busy sipping a glass of Chilean red wine and didn’t seem to interested in the kerfuffle.’

Things didn’t improve when the managers reached the United States. Not helped by the searing Nevada heat, and after an arduous 11-hour flight, Mourinho and Van Gaal were barely on speaking terms. Mourinho blamed a pilot, a taxi driver and a cactus for his foul mood.

Despite the rift, Mourinho, Van Gaal and Wenger did make it to one of the many casinos on offer later that evening. Pellegrini’s whereabouts are not known, though it is rumoured he left the group to purchase some cigars. Wenger, who had acted as peacemaker earlier, was soon the subject of Van Gaal’s ire as the Manchester United manager took exception to Wenger’s thriftiness at the bar. In contrast, Van Gaal had already shelled out more than the asking price for various drinks, including a bottle of vintage French wine that was yet to mature.

It’s reported that Wenger was so upset Mourinho didn’t back him up in the casino that a pushing match in front of the slot machines soon broke out.

Luckily, despite the heat, Wenger was rocking a bubble jacket which reduced the risk of any light bruising.

The main purpose for the trip was to scoop the jackpot on the biggest slot machine in town, ‘The Premier Dip’.

Mourinho, despite winning the prize earlier this year, told onlookers that Pellegrini was the favourite to scoop the most prestigious prize in gambling.

This time around, Mourinho’s methodical, if unattractive, approach to the machine did not bear fruit. Van Gaal also attended the slot machine later in the evening but, despite having the highest quantity of quarters in his pocket, didn’t actually attempt to pull the lever. Wenger had one go, but injured his finger and was on ice for the rest of the evening. It was easy to see why Manuel was favourite for the jackpot.

The scuffle between Wenger and Mourinho paled in comparison later that weekend, when an intoxicated Van Gaal spotted Ronald Koeman and Pep Guardiola enjoying a game of Blackjack. The Dutchman perceived the pair to be laughing at his expense, and a huge brawl erupted. Koeman could be heard shouting ‘Where’s Fellaini now?’ as he was dragged away by security. Van Gaal, bloodied but not beaten, then tried to bore Guardiola into submission by flicking his ears, despite being repeatedly punched in the face by the Bayern Munich manager.

Van Gaal’s tortuous night was complete after staggering to his private car, only to discover that his chauffeur Pedro had left his post to escort Mourinho down the Las Vegas strip. It is rumoured that the Dutchman shouted ‘Louis Van Gaal’s Army!’ before falling asleep in a bin. Arsene Wenger was unavailable for comment on this matter, as he didn’t see the incident.

Despite Pellegrini being favourite to win big in Vegas, the four returned to England with the jackpot yet to be collected, though a return trip is being provisionally planned for May, albeit with a much smaller party. Mourinho’s luggage is also rumoured to be missing, which bizarrely contained all of Arsene Wenger’s underwear.

As the four went their separate ways, it was Pellegrini who had the biggest smile on his face. With his new squeeze – a recently available female named Eva – on his arm and a skip in his step, the Chilean probably did have the most to smile about.

Will Pellegrini’s ‘footloose and fancy-free’ demeanour last? He’ll undoubtedly check back in during May to find out, but it remains to be seen if he will book early, or wait for one of Sergio Aguero’s last-minute deals.