Chievo: Fairytale of the Flying Donkeys 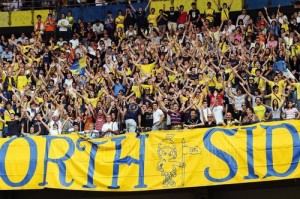 “Two households, both alike in dignity, in fair Verona where we lay our scene. From ancient grudge break to new mutiny, where civil blood makes civil hands unclean.”

Italians are cool. Fact. Much cooler than us English anyway.

From the way they dress, to their food and weather, our friends in Europe’s boot seem to one-up us in every aspect, even in football.

Yes, Serie A may not be as typically entertaining as our beloved Premier League, but it’s a lot more hectic, controversial and down-right barmy – for example, while they introduce their new signings wearing lion masks (a very novel way of Napoli unveiling Gokhan Inler), we get Jim White making noises that not even his wife will have heard for the past twenty years over mundane and not-at-all-exciting Deadline Day transfers.

One other thing they can better us at is football fairytales. Yes, we’ve a few, but not quite like the Italians, and they have one miraculous tale in particular. And like Romeo & Juliet, it’s set in Verona and features two warring factions…

Formed in 1929, AC Chievo Verona weren’t even playing professional football until 1986, and many of the quarter of million inhabitants of Verona hadn’t heard of them. Not hard, I suppose, when you find out Chievo is a 4500-strong suburb of the city.

Ceo weren’t even playing on a proper football pitch until their rise into the professional ranks of Serie C2 in ’86, when they moved in with their big brothers Hellas Verona, the city’s traditional club and then-Serie A champions, at the Stadio Marc’Antonio Bentegodi. The near 40,000 capacity stadium was a far cry from the tiny parish field at Carlantonio Bottagisio they had been using previously.

Promotion into Serie C1 followed in 1989, and astonishingly, Chievo stormed into Serie B in the mid-nineties, meaning they were finally on a level playing field with their city rivals.

The first few derbies, known as “Derby della Scalla”, referring to the Scaligeri family, rulers of Verona during the Middle Ages and Renaissance period, bore the Hellas chant, “quando i mussi volara, il Ceo in Serie A” – donkeys will fly before Chievo are in Serie A.

One can only assume planes over Verona during the following years had to avoid a plague of flying asses, as Chievo made it into the top tier in 2001. They stormed out of the blocks, leading the league for six weeks and defying critics and pundits to finish fifth at the end of an amazing season, the highlight being a 3-0 win at the San Siro against Inter Milan. The 2001/02 season was so astonishing it even coined its own nickname used throughout Italy – Miracolo Chievo. And if Ceo fans didn’t think it could get any better than that, the suburb side were soon playing in both of Europe’s biggest cup competitions within the subsequent six years.

Hellas fans are reminded of their notorious chant almost every day, as, following their Serie A promotion, Chievo adopted “the Flying Donkeys” (il Mussi Volanti) as a nickname and badge of honour – Hellas fans didn’t so much have their words rammed down their throat as forced through every orifice with a barge pole. That they then dropped down into Serie C1 while their rivals made their Champions League debut was just another kick in the teeth for il Mastini.

Currently, both Verona sides are plying their trade in Italy’s top-tier, albeit at opposite ends. Hellas have, for wont of a better phrase, “done a Chievo”, and are flirting with Europe following their rise from the Lega Pro having been promoted twice in three years, while Italy’s fairytale club are battling hard against relegation.

Chievo are still a small club, with an equally small, passionate set of fans, defying the odds every season they stay in the top flight. They still rent at the Bentegodi, and, despite being the recently more successful of the two Gialloblu clubs, average lower attendances than their landlords. Amazingly, this was even the case while Chievo thrived in Serie A parallel to Hellas’ stay in Serie C1 in the mid-noughties.

That’s unlikely to change – Hellas are a club steeped in tradition, over 100 years’ worth of history laced with the ultimate prize of a scudetto and are the favoured club of the northern Italian city, while Chievo are still relative newbies in the game’s professional ranks. Il Mastini will always be the city, while il Mussi Volanti will always be the suburb.

Chievo’s rise is a remarkable achievement and it is hard to think of an English equivalent. It’d probably be similar to Dulwich Hamlet getting into League Two, moving into a groundshare with Chelsea and earning promotion to the Premier League, upon which they beat Manchester City at the Etihad and qualify for Europe. It just wouldn’t happen here, and that’s another reason why Italy’s just that little bit cooler than us – over there, underdog stories actually materialise and, come on, when has an underdog story ever not been cool?!

In the days when modern football is cold-hearted, more business-like and money-orientated than ever, it’s always nice to see a club defying the odds and saying; “no, we may be small but we have just as much a right to be here as everyone else”. Chievo are a fairytale, a perennial underdog, and, as long as they stay in Serie A, a constant reminder success isn’t a dish best served with a billionaire Sheikh.

In Romeo & Juliet, the two heroes fight for passion and all that’s good about humanity in the face of adversity and convention. Let’s just hope that, unlike the underdogs of Shakespeare’s Veronese love story, the Flying Donkeys live on to keep defying the odds.