MICHAEL Calvin’s latest book is part memoir, part a reconnection with football after falling out of love with the game.

Written at a time of Covid-19 and when football has never seemed so distant from the fans, he looks to the future and links back to the past to reconnect. He recounts his experiences from major sporting events and on meeting the big players from around the world to show us how football can be better.

At the beginning he has fallen out of love with football. ‘Worn down by its negativity, venality and elitism, I reached the point where anger was exhausted and was ready to surrender to apathy. I loathed the institutional bitterness and ignorance of social media, on which everyone has to have an opinion, however bigoted or uninformed. I despaired of football’s hysterical high priests and its bloodless bureaucracy.’

He goes back in time to pre-World Wide Web, to world events and football that are intertwined in his memory. John Lennon’s death, the fall of the Berlin Wall and the Heysel Disaster demonstrate that football requires context, care and consideration.

Calvin moves on to other sports like rally driving, boxing, athletics and sailing and the narrative loses a little momentum, but he powerfully returns to football with Bobby Charlton after the Munich Air Disaster.

There are worrying stories of how some football academies take young talent and discard it too easily, causing mental health problems for young players. ‘…This was the key element in my falling out of love with football, it was too rapacious, too casual in diminishing the damage it created.’ 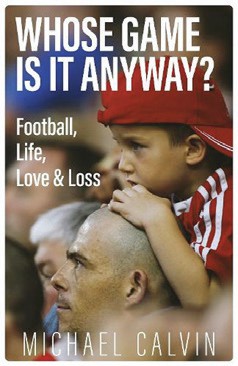 The chapter about the demise of Bury FC and the rebirth of AFC Bury is particularly affecting. Long-time fan James Bentley provides an emotionally charged account of what he has lost.

‘Gigg Lane is like a ghost town. When I go there now, it physically hurts. I could do the walk there with my eyes closed. I know every bump in every paving slab. Until expulsion, it was a part of my life for 31 years, to the day. I know it sounds cliched but you just stand there, go through all the goals, the saves, the great moments you had with your mates when you were a teenager.’

Calvin reconnects with football when he celebrates an Accrington Stanley goal. ‘I realised, then, how much I had missed that release of emotion that accompanies a beautifully struck leather ball hitting the taut side panel of a net. Club colours didn’t matter; this was an Everyman experience.’

The book is a timely reminder of why football is so much more important than the selfish Super League clubs. It is an illuminating journey of discovery and we end on a positive note, suggesting that there are some Premier League agents-for-change like Marcus Rashford and community-led clubs like Lewes, Accrington and AFC Wimbledon who offer real hope for the future of football.