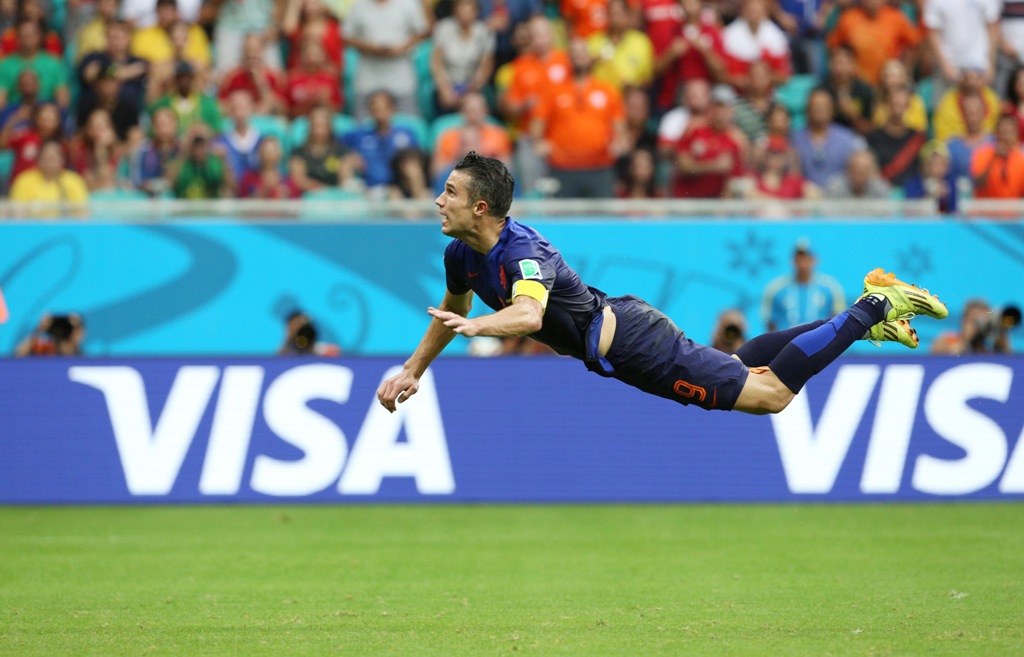 A DIVING header is the most splendid sight in football. Picture the scene: a player flying through the air, ghosting in front of the opposition, committing his whole body to the cause, ignoring the threat of stray boots to the head and meeting his destiny with expert timing. Oohhhhh yeeaaaah! The diving header is of the purest beauty.

But have they become extinct in a world of over-pampered millionaire footballers? Why don’t we see more of them? And do we really give the endangered diving header the love it deserves?

I’ve been intending to write this article for some time. Originally, it was just going to be a moan about the under-appreciation and general absence of diving headers in today’s game.

And now, months later, having finally got round to it, I’ve realised the footballing world is perhaps on the verge of embracing the diving header – it’s about time, too!

The fact is the diving header is not extinct, not yet anyway, but it does possess a particularly nostalgic quality.

Bread and butter centre-forwards launching themselves across mud-laden six-yard boxes to crash the ball in off their 99p haircut festooned heads. Ah, the good old days – when players would quite literally die for the shirt! When they would put their whole life on the line just to put the ball in the net! When men were men, when football was the game of the people, oh the good old days!

Yet the diving header might finally be on the verge of a 21st century comeback.

Take England’s November internationals, for example. Much to my delight, Gareth Southgate’s masterplan as new Three Lions boss seems widely centred around the diving header- to the extent that three of their five goals came from glorious leaps through the air.

Okay, okay, so Adam Lallana’s goal wasn’t your traditional diving header, his trajectory being more crabwise than usual. However, he still used the whole of his body to complete the manoeuvre AND he still ended up on the ground. IT COUNTS!

And there’s absolutely no question when it comes to Daniel Sturridge and Jamie Vardy’s efforts; both of them gorgeously bullet-like finishes past the destitute figures of  Craig Gordan and Pepe Reina in goal.

At last it seems England have a manager who knows what he’s doing. Diving headers are going to win England the 2018 World Cup! You heard it here first.

Maybe that’s what it’ll take for the diving header to truly get the appreciation it deserves.

Obviously, every football fan likes a diving header but when compared with the adoration bicycle kicks, 30-yard volleys and knuckle ball free-kicks receive, the diving header might start to feel a bit like ‘the ginger one’ from Girls Aloud, overshadowed by its more glamorous counterparts.

Looking back to the 2014 World Cup, Robin Van Persie’s balletic header against Spain was not only the most magical moment of the tournament but also one of the greatest goals ever scored at the finals.

Daley Blind’s searching cross-field ball evaded the Spanish backline to find the Holland captain who watched the ball all the way onto his head, thrusting his upper body forward, pushing his legs back and perfectly directing the ball over the head of Iker Casillas and into the top right corner (cue a mass of ‘flying Dutchman’ headlines).

Alas, somewhat typically, this work of Dutch mastery was overlooked, losing out to that bang average James Rodriguez volley for the FIFA Puskas Award 2014.

This is not only a clear demonstration of bigotry towards headed goals but also a failure on FIFA’s part to recognise one of the most genius goals ever scored.

It is therefore imperative that football fans and players around the world do all they can to conserve and promote this creature of dazzling beauty. Once it’s gone, it’s gone.

Even outside its natural habitat of the opposition’s penalty area, the diving header has proved an effective option.

French goalkeeper Greogry Coupet famously utilised the diving header in his outstanding double save against Barcelona in a 2001-02 Champions League match (if you haven’t seen it, it’s well worth a Youtube).

And we all remember John Terry’s heroic and slightly foolhardy attempt to block a Slovenian attack with a diving header at the 2010 World Cup.

The endeavour of Mr Southgate to endorse this magnificent aspect of football has not gone unnoticed and it would seem others are coming on board.

Indeed, efforts to promote the manoeuvre can be witnessed as far afield as South America with Uruguay forward Nicolas Lodeiro diving in to score against Venezuela this October.

Such noble attempts will go a long way to cementing the diving header’s place in the game for decades to come.

We all have a diving header close to our hearts. For me, it came in April 2013 at Wembley Stadium.

A calamitous first half left Hull City 2-1 down to Sheffield United in the FA Cup semi-final but, thanks to goals from Matty Fryatt and Tom Huddlestone, the Tigers were 3-2 up with just under 25 minutes to go.

And that’s when it came – 67 minutes on the clock, David Meyler fed in Jake Livermore down the right who crossed deliciously for Stephen Quinn-iesta to swoop in and deflect the ball off a fiery tuft of hair. Four-two and party time for the black and amber army!

But that’s just my story. If over the years a diving header has lifted you off your seat, left you speechless or made you cry, then now is the time to take note.

Do you really give the diving head the love it so blatantly merits?

So finally, I beg, footballers of the world hear my prayer!

Next time you’re making your way into the opposition area, hoping to get on the end of a speculative cross, take a moment to consider the diving header.

With the ball approaching fast and low, don’t simply swing a boot at it. Spring off the ground like a cat, propel yourself forward and watch the ball fly off your head and into the back of the net.