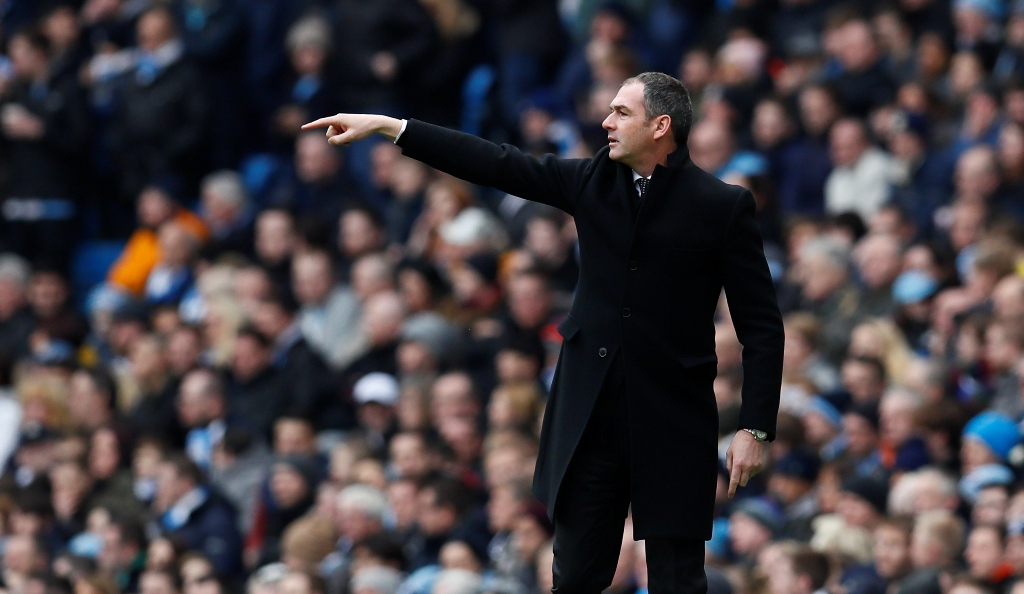 SWANSEA City boss Paul Clement has today been named the Premier League’s Manager of the Month for January after seeing his side claim nine points from a possible 12 and move off the foot of the table.

When Clement took over from Bob Bradley on January 3rd, the Swans looked destined for a return to Championship football – their wretched form and kamikaze defending under the guidance of their struggling American manager looked to be a recipe for disaster.

Fast forward a month however, and Swansea now look to be a side that has the confidence, and a plan, to escape the dreaded drop.

Clement masterminded wins at Crystal Palace and at home to Southampton, as well as a famous victory at Anfield when Swansea played brilliantly on the counter attack to defeat the Reds 3-2.

That priceless victory could well have been the turning point this season, and it has certainly given them increased confidence; even at Man City last Saturday, Swansea, led by the brilliant Gylfi Sigurdsson, came within minutes of getting a point.

Clement told BBC Sport: “January was a good month. Now we need February to be good as well.

“It’s a great honour for me personally but it’s a big recognition for all the work that’s been done by the players, the backroom staff and also the support the fans have given us both home and away.

“It’s not easy, but everybody is working hard towards our objective which is to remain playing at this level of football.”

In one of the tightest relegation battles the Premier League has seen for many a year, performances, and potential bonus points like the ones gained at Liverpool and so nearly at the Etihad, could be priceless, while wins against teams around them such as Palace are almost imperative.

Thanks to Clement, Swansea look more than capable of getting the points on the board, and climbing the table, but the former Derby boss told BBC Sport: “We’ve got 14 games to go, very hard games, and we have to approach each game with 100% focus and concentration to continue getting good results.

“I don’t know the folklore [about the Manager of the Month ‘curse’] but we’re working everyday to improve and we’ve got a very important game against Leicester at home.”

Sunday’s clash against Leicester is a sign of just how tight it is at the bottom; last season’s champions are fighting for their lives, while a period of good results has hauled Swansea up into 17th place.

Amazingly, just two points separate bottom club Sunderland and 15th placed Middlesbrough, and the table has only ever been tighter this late in the season once, in 2009.

This weekend,with Sunderland, Palace, and Hull facing tough trips to Southampton, Stoke and Arsenal, Swansea and Leicester playing each other and even Bournemouth, in 14th, facing a tough game at Man City, the table could be even tighter on Sunday evening.

Whoever can pick up some form and some points will be in the driving seat for survival, and at the moment, Clement’s Swansea must fancy their chances.

Like Clement, Tottenham’s Dele Alli was also rewarded for his brilliant form in January, and has snapped up the January’s Player of the Month award.

The former MK Dons starlet had an excellent start to 2017, and no-one in England’s top flight scored more in January than Alli’s five, which included a terrific headed brace against bitter rivals Chelsea.

The form of Alli has helped Spurs put together a genuine title charge, and as it stands, they look the club most likely to challenge Antonio Conte’s side.