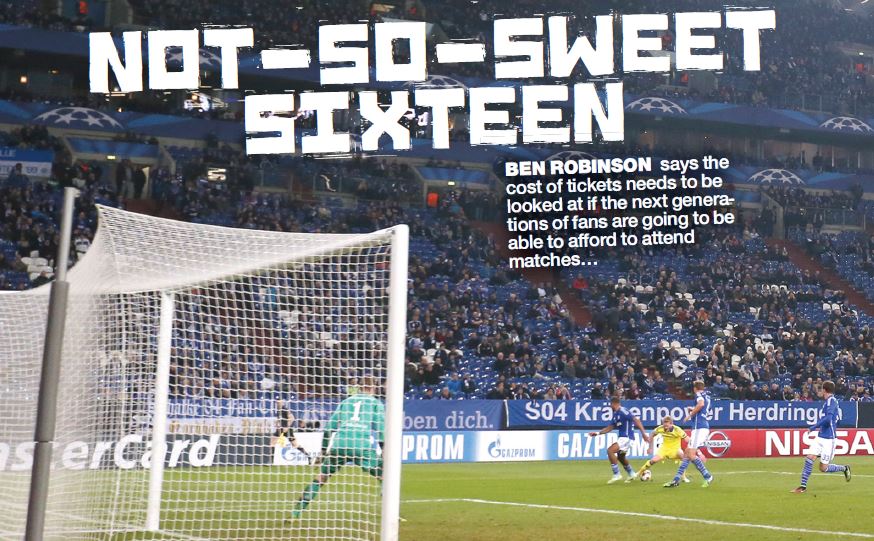 OUR teenage years are the most challenging times of our lives.  There is the constant battle against spots (which can never be won), the frustration of constantly growing out of clothes you only just bought and the embarrassment of never being able to get a girlfriend (or at least one who supports the same club!).

Then there’s school and college and the pressures of trying to fit in/be cool and gain some decent qualifications.

The list of problems goes on as long as the wait Liverpool have had to win the Premier League!

The only known remedy to cure this sorrowful existence is football but even that luxury is being eaten away at.

For decades every weekend, teenagers across the country have found comfort in the knowledge that for one day at least the pressures of exam boredom are forgotten as they watch the beautiful game.

Win, lose or draw, these days are times to relax and let off steam before another week’s worth of revision and exam preparation attack.

So why is it that so many clubs are unwelcoming and look to alienate teenagers by having expensive and confusing ticket pricing policies?

There is a myriad of pricing categories those aged 16 come under, which vary from club to club.

At some clubs they are classed as adults, at others they are children, in some cases they could be deemed as students or even concessions.

It is difficult to know when purchasing tickets which price category you will be under. This, of course, directly affects the price you end up paying – and often by a considerable sum.

The most confusing situation is when you qualify for more than one price bracket. What do you do if you can be classed as both a student and a concession?

To a cash-strapped teen, the only obvious solution is to take the cheapest choice and even then the prices are often too expensive.

At Bradford City, your ticket price increases by one third of the former price, and this is not even the largest increase.

At local rivals Leeds United, in turning 16 the cost of your ticket doubles from £10 to £20 overnight in the East stand (but in other sections could more than triple and cost more than £30).

To make matters worse, the price of a season ticket in the East stand increases massively by £196.

So unless you’ve been saving up a shedload of pocket money, no teenager will be able to afford this price hike.

It isn’t only the teenage supporters of Leeds United that are feeling the pinch either.

In August 2011, in the Guardian, David Conn reported that the average age of a season-ticket holder in the Premier League was 41. He concluded: “Premier League surveys for years show a consistent reduction in the proportion of young people who pay full price from 16.”

This is without doubt due to the price increase that you face upon turning 16.

This can even be seen in the plight of two of England’s best attended clubs.

The stats seem to show the same fans are buying the season tickets, and no younger fans are being attracted because of the price hike.

Never mind the MLS, the Premier League is turning into a retirement league – but for the fans!

This starkly contrasts with the situation in Germany where the young Fan-Nachwuchs (“fan offspring”) are thriving.

In Germany, tickets for adults at clubs such as Hamburg and Schalke sell for around £13, cheaper than the average ticket for those aged 16 in England.

This has led to more younger fans continuing to attend matches after turning 16, unlike in England where the price increase tends to lead to fans trailing off.

The question has to be whether or not a similar result can be reached in England. Historically, English fans aren’t too fond of the Germans but in Huddersfield they practically worship one.

The German-born manager David Wagner and his ” Wagner revolution” has led to cheaper match day tickets for those 17 and under at Huddersfield Town.

At the John Smith’s Stadium, matchday tickets are only £5 for teens, a policy that was continued even for the glamorous FA Cup game against Manchester City, a game which subsequently broke the club’s record attendance.

Competitive pricing for teens has undoubtedly led to the club’s increasing matchday attendance and has been instrumental in allowing the club to push for promotion this season.

It also helps to guarantee that the Terriers keep their bark at home games and will continue to do so for the next generation to come.

The only other possible alternative is safe standing. This would allow more fans to fit into the same space, increasing attendance, and therefore would allow for clubs to be able to lower ticket prices.

The only problem with this solution is the reluctance of the government to change the law. Despite popular petitions and many well-publicised campaigns, there have been no signs that the law will be changed any time soon.

Instead, the focus should be put on lowering ticket prices in general, rather than blindly arguing for safe standing which has got us nowhere so far.

The solution to the problem is clear. With more games than ever televised and the cost of going to a game the highest its ever been, we need a powerful incentive to keep young fans going to games, even after turning 16.

The answer is simple and is already working in England, at Huddersfield.

A great example of the German model of low prices and high attendance working in practice, not just in theory.

If English football does not make efforts to resolve the issue now, we will face a serious dilemma and one which will have a deep and lasting impact on society… if not for the football, how are we ever going to get teenagers out of their beds?

*This article originally featured in the April/May edition of Late Tackle. The latest edition is available now!